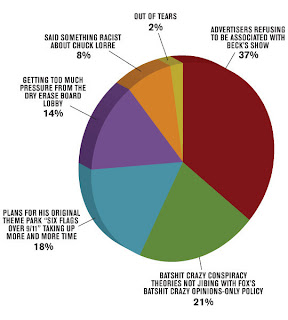 Glenn Beck Leaving Fox... No one actually asked this... Actually, pie charts evolved from graphs... For the better...
When it was announced yesterday that longtime companions Glenn Beck and Fox News would be going their separate ways, a lot of people were left asking, Why?
It's common knowledge that Glenn Beck's show was facing a major advertiser problem, but as we've said many times, there's never one reason things go awry in this world. That's why God.... invented pie charts. Below we've broken down the different reasons Beck was forced to step down, so that you may have a fuller understanding of why your life has been inexorably changed